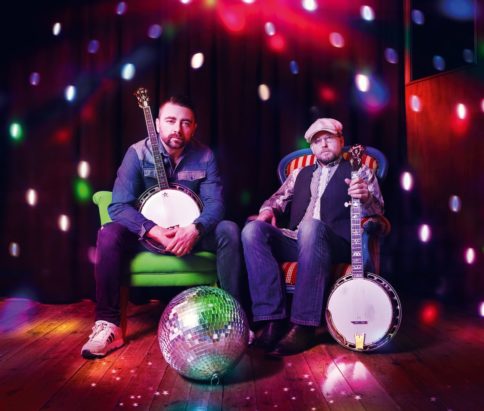 Damien O’Kane & Ron Block both grew up immersed in their local scenes, Ron in Southern California and Damien in Coleraine, Northern Ireland. Ron’s big gig came in 1991, when he joined the Grammy winning Alison Krauss. Damien played with Flook among others, before joining Kate Rusby’s band in 2008 and has been nominated twice at BBC Radio 2 Folk Awards. Co-incidentally it was through Kate that the two met. 2018’s debut record Banjophony, was a crossover of traditional Irish and bluegrass banjo never quite offered before. When cultures were feeling divided globally, they gave us something between distraction and hope. Essentially, there’s a whole lot of banjo played to the highest level with an incredible band. Their unity, sense of fun and insane abilities on tenor and 5-string banjo, have been described as ‘groundbreaking.’ There’s mutual respect, particularly for Ron’s eloquence and string-bending tyle and for Damien’s driving, decorated and improvisational flair. Damien & Ron are set to release their second record, Banjophonics, in June 2022. They will be joined on stage by their long-time collaborator Duncan Lyall on bass and moog, Ali Hutton on guitars and very special guest for UTSf 2022, Michael McGoldrick on flutes and whistles.