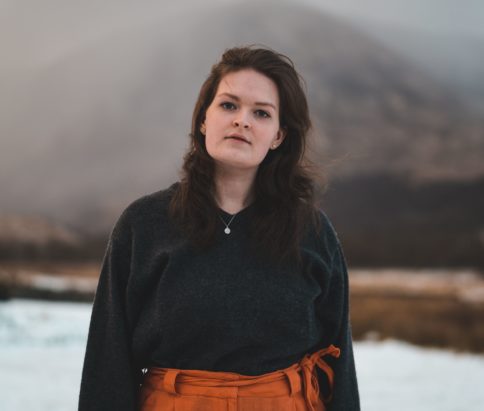 Iona Lane is a Leeds-based folk singer and songwriter, who recently released her debut album entitled Hallival. Having found herself fascinated by folklore and folk stories from across the UK, it is inspired by natural landscapes, scientific discoveries, equality, human relationships and the supernatural, all tied together by a strong sense of place and a love for being in wild places. The name Hallival is taken after one of the mountains on the Isle of Rum, which inspired the writing for the opening track Western Tidal Swell. Karine Polwart and Julie Fowlis, amongst others, selected Western Tidal Swell to win the Feis Rois/NatureScots In Tune With Nature competition in 2020. Having studied under the tuition of Nancy Kerr, Jim Moray and Stuart McCallum, Iona has been praised throughout the scene for her delicate yet powerful vocals, which have captivated audiences up and down the country. Iona was chosen by Karine Polwart to receive the Taran Guitars Young Players Bursary 2020. Since receiving the bursary luthier Rory Dowling, of Taran Guitars, has designed and built a bespoke instrument for Iona’s music.