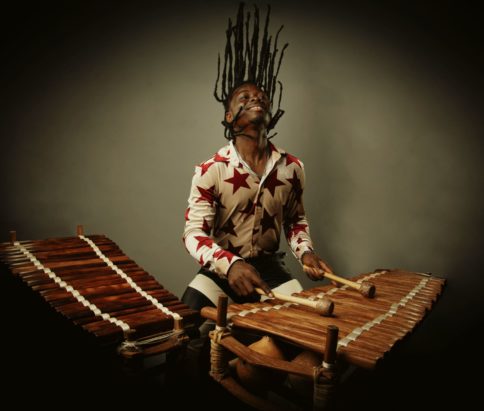 N’famady Kouyaté is a master musician from Guinea, a talented multi-instrumentalist who has been wowing audiences across the UK. Having moved to Wales in 2019, he has been described as one of Wales most exciting and talented young musicians. A vibrant performer, he performs modern interpretations of traditional West African Mandingue songs and rhythms. N’famady’s primary instrument is the balafon, the traditional wooden xylophone, sacred to West African culture and his family heritage of the griot/djeli. In Guinea he founded Les Héritiers du Mandingue a traditional-modern group that toured extensively in West Africa. In the UK, N’famady has played both as a solo artist and with a full band line up, where his arrangements are a fusion of Mandingue African with western jazz, pop, indie, and funk influences provided by an ever-evolving collective of musicians. Instrumentation includes balafon, keyboards, drumkit, djembe, guitar, bass, kora, doundoun, congas, saxophone, trumpet, & callabash. N’famady’s performances create amazing atmospheres and vibrations wherever he goes, and audiences are charmed by his infectious enthusiasm and joy. To date he has collaborated with the likes Gruff Rhys (Super Furry Animals), Lisa Jên Brown (9Bach), and Kliph Scurlock (The Flaming Lips).