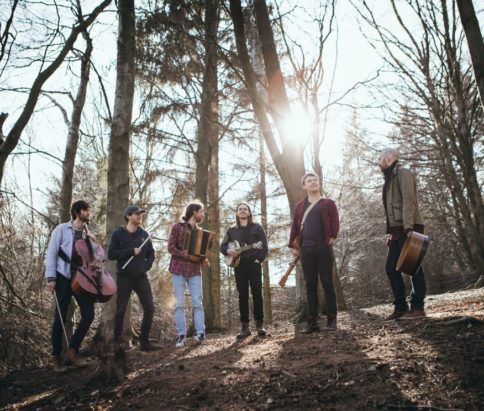 With a reputation as one of the best live acts on the UK folk scene, The Lost Boys is the brainchild of BBC Radio 2 Folk Award winning singer, songwriter, multi-instrumentalist and producer Sam Kelly.  Joining Sam are the virtuosic talents of Jamie Francis (banjo), Graham Coe (cello), Toby Shaer (whistles, fiddle), Archie Moss (melodeon) and Evan Carson (drums). They’re known for their eclectic and innovative reworking of traditional songs and tunes from England, Scotland, Ireland and the USA, as well as stunning original music and the occasional surprise classic rock cover. They’ve been described by Seth Lakeman as “one of the best bands on the scene” and by broadcaster Mark Radcliffe as “amazing, thrilling music”. You can expect to hear uplifting melodies, soaring harmonies and high-octane instrumental performances, all led by Sam’s stunning vocals and with a dash of cheeky humour. Their most recent album, The Wishing Tree, came out last year and is recommended.