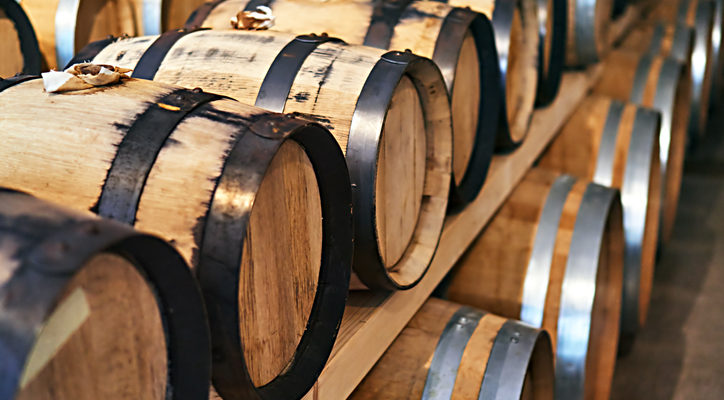 Lots of work goes on behind the scenes at festivals and the bar is definitely one of those operations that takes some slick planning. This is why we rely on our faithful friends at Light and Hoppy Festival Bars, which is very much a family business, a partnership between brothers Mike and David Kirrage. Both have a long experience as licensees in the Newark area with their fabulous respective wives Kim and Lesley. When available, they are joined by some of the younger Kirrages and receive valuable management support from two long standing associates Stu and Aaron. They are all ruddy brilliant in our eyes! 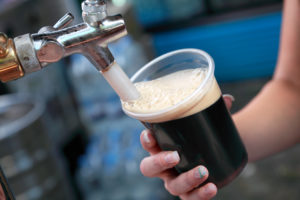 This strong family ethic is something we share as a festival. It is certainly one of the reasons we thoroughly enjoy working with them so much.

Interestingly, Mike and Kim were proprietors for 14 years of the Cross Keys Upton near Southwell, where they staged regular live music. Capacity was only 80 but still managed to attract some great names. Highlights were Fairport Convention and Eric Bibb. Last act scheduled to play was booked to appear in January 1999. Unfortunately they sold the pub in December 1998 so the gig was moved to a local village hall. It still sold out with a record attendance for the venue… The artist – Kate Rusby.

Mike is now a Festival & Artistic Director and Kim is Finance Director of the Gate to Southwell Festival which they set up in 2007. It is a fab festival which also has very good beer! 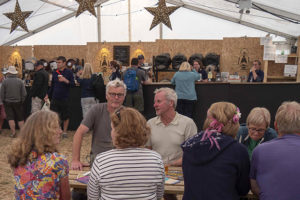 “The bar construction is a partnership between us and the excellent build team at UTS for whom nothing appears to be too much trouble. We work out what will provide the most efficient design for the back bar and then work together to implement, it’s a fantastic relationship. We aim to make the bar not just functional but stylish.

We arrive on the Monday and our first task is to assemble the racking for the back of the bar, which carries the guest beers. These are the ones people can see which are dispensed by gravity. Next we assemble the front bar counters. We then put in the under bar stillage which carry the larger barrels of ‘house beer’ and some cellar stillage behind the back bar for other guest beers all served on handpump – to suit the Yorkshire palette.“

“On Tuesday, all the deliveries arrive, which we try to stagger so that as much beer as possible is racked between deliveries. We use three local breweries who supply a combination of their own beers and swaps with other beers – from Yorkshire of course. Lagers, ciders, wines, spirits and soft drinks come separately from a wholesaler.”

“The next job is to get all the pipework and coolers set up. The cask beers are chilled by a combination of ‘temperature probes’ and ‘saddle’ coolers. The lagers and ciders go through a remote cooler and then a circulating python to the point of dispense. We also attach all the handpumps to the bar counters.

Last job on Wednesday is to vent and tap most of the racked beer and insert the probes – and carry out a little well deserved ‘testing’!”

“On Thursday all the lines are cleaned. Although everything is cleaned after last use, we always reclean before next use. The fridges are all stocked and any remaining decoration, tarting up, etc. is carried out. We are then ready for service Thursday night for anyone that is onsite, including production crew, build team and volunteers.”

Light and Hoppy have been absolutely fantastic and have worked so hard for us over the years. We couldn’t ask any more of them. As you can see from the above, it is definitely something you need the professionals for. 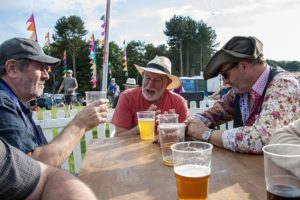 Last year they sold a whopping 22 different Yorkshire beers, 20 ciders and 15 gins. We asked about their company name to which they replied, “The name Light and Hoppy came about because whenever people were asked what sort of beer they wanted, they invariably answered “something light and hoppy!”

Another reason why we were so impressed with them, they reduce their plastic waste, in fact, Light and Hoppy were early pioneers of operating a deposit scheme for plastic glasses at the Gate to Southwell Festival. Since then, many festivals have followed suit, which has resulted in a huge reduction in plastic waste, something that we as a festival very much embrace.

Well, we now have the name of our 2019 beer thanks to our competition winner, Robin Hepburn, called Orion’s Belter, so we will be having a special brew again this year. Hurrah! Thanks Light and Hoppy, super looking forward to having you guys onsite once again. You really well and truly raise the ‘bar’ in what you do… 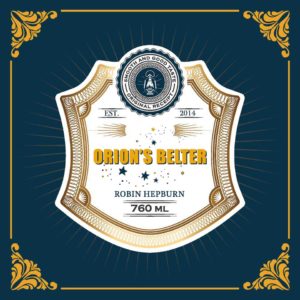